Dennis Banks and the Lady Hawk Singers at the New England Peace Pagoda.

A large crowd came together with the overwhelming feeling of hope and determination in these strange times.

Beth Adams spoke about the men locked in Guantanamo Bay who are still on hunger strike, and upcoming actions with Witness Torture

Also an announcement was made, an update sent from Charmaine White Face and the Defenders of the Black Hills.

After writing and lobbying legislators, the “Uranium Exploration and Mining Accountability Act” has found a sponsor! Democratic Congressman Raul Grijalva from the 3rd District in Arizona has agreed to sponsor the bill! This is a huge step, but by no means is the end of the road. 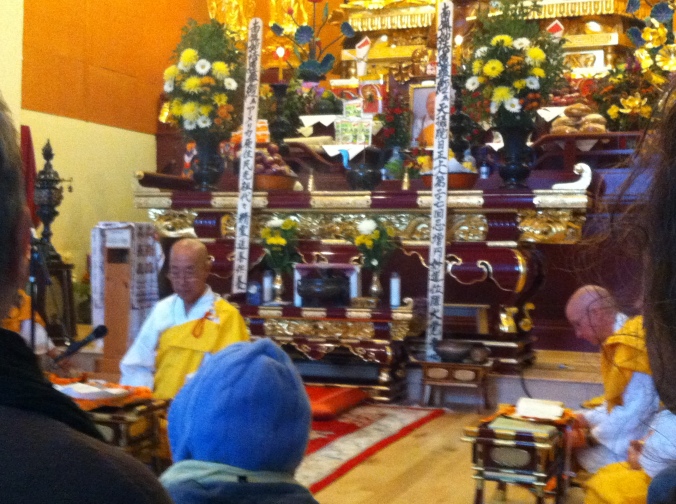 Our local Congressman Jim McGovern (who sent greetings from Washington where he is working with others to resolve the Government shut down) has agreed to support the bill when it is raised.

This is a hugely important time. We have to show McGovern and Grijalva that we support this bill and will see it through to the end.

The New England Peace Pagoda will continue supporting the Uranium Exploration Mining and Accountability Act, and the work of the Defenders of the Black Hills.

A summary of the intention of the walk for community members of Smith College on the eve of Nagasaki Day.

“ Instead of hypothesizing potential enemies, let us hypothesize this world as a potential heaven. Instead of suspecting others as potential murderers, let us believe in the Buddha nature of others, that they are children of God. Instead of looking at others with contempt, let us hold mutual respect and venerate one another.”

A Walk to Build a Non Violent World

On a beautiful morning at the Leverett Peace Pagoda, walkers set out on a five day walk. On the morning of our first day, our prayers were shared and it was mentioned that an intention for the walk to acknowledge all forms of violence be recognized. We stated that the Boston Marathon tragedy be placed in a larger socio political context of American violence as exerted in rest of the world, particularly, most recently in Iraq and Afghanistan. We culminated our walk arriving in Harvard Square in Boston to remember Hiroshima.

We walked carrying four critical messages that were shared with city officials and community members in Worcester, Watertown, Dorchester, Cambridge and Boston. The messages included:

She said, “This culture of violence that we live in is unacceptable. On our streets and across the globe, the pervasive presence of violence has infected the lives of millions, and it is far past time we address it as a nation…We invest hundreds of billions each year in the pentagon, in war colleges, military academies, and our national defense universities all to develop war tactics and strategies. Now we need that kind of investment in peace and non-violence here at home.”

CALLING FOR U.S. LEADERSHIP IN GLOBAL ELIMINATION OF NUCLEAR WEAPONS AND REDIRECTION OF MILITARY SPENDING TO DOMESTIC NEEDS.

We presented: The petition to “Abolish Nuclear Weapons Now!” urging the United States to join in multilateral efforts to achieve the global elimination of nuclear weapons. The time is right. As [president Barack Obama] said in Berlin, “So long as nuclear weapons exist, we are not truly safe.”

Where we quoted the governor as saying:

This community can heal if we turn to each other and not on each other.” We the Leverett Peace Pagoda requested that the people of Boston and the world, choose a different path of critical reflection, choosing love and not fear in our collective response to the tragedy. We spoke candidly of the violence inherent in a racist backlash for all Arab people, Arab Americans and specifically Muslim people of America and the world.

All of these issues and events are inextricably linked to what we remember on August 6 as Hiroshima Day and today on August 9 as Nagasaki day. We concluded our walk at the Premiere of the film;

HIBAKUSHA, OUR LIFE TO LIVE | A film of survival by David Rothauser

Creating a discussion: Article 9, A template for Peace

And best quote, as it appeared on our walk:

“…We cannot repeat the sin.”

Abolish nuclear everything now. Please sign the petition for President Obama to attend the high level nuclear disarmament meeting at the UN on September 26, 2013. Thank you for your support to build a non violent world.

“Sally is right about the event being special. The walk was multifaceted: was very sad, very moving, and very inspiring. One poignant moment was when Midland Avenue Relief organizer Aiman Youseff played a recording of Our Father in Aramaic – as the Buddhist celebrants bowed their heads in reverence. A graphic representation of the Buddhist concept of interbeing / interdependence. Icing on the cake – a fella from Jersey who owns Drink King, a beverage distributor, dropped off several pallets of Gerolsteiner – a type of mineral water that I drink a lot of when visiting the ancestral homeland. ” —ThomasAGood

“We had an amazing day yesterday with the Peace Walkers. As planned we met at Guyon Ave and Mill Rd (not Ave, sorry!) in the morning. Bill Johnsen led us on a walk through the Ocean Breeze and Midland Beach communities. We stopped at the community recovery centers and spoke to the volunteers and residents about the challenges ahead. Every Saturday morning Bill starts out at Guyon and Mill and makes this walk from Ocean Breeze to South Beach. Everyone knows him and thanks him for his work raising awareness of the struggles of the residents and the commitment of the volunteers.

From Midland Beach we made the walk up to Richmond Road to Clove Road to Post Ave to the Buddhist Temple in Port Richmond. Snow fell a good part of the way. The drums and chant make it easy to walk. At the temple Bhante Wimalajothi greeted us. Pat Berg brought a wonderful hot meal and her famous Peace Cakes. And we were able to rest and talk.

Thank you to the Temple, the Peace Walkers, Bill Johnsen, Tom Good and everyone who supported or walked.

Via Flickr:
QOTD: All we are saying is give peace a chance. — John Lennon *** Quote from The Hip Pocket Guide To Offbeat Wisdom by William Sauer 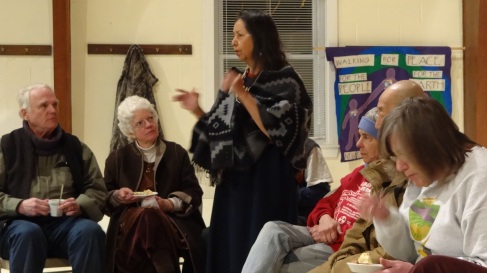 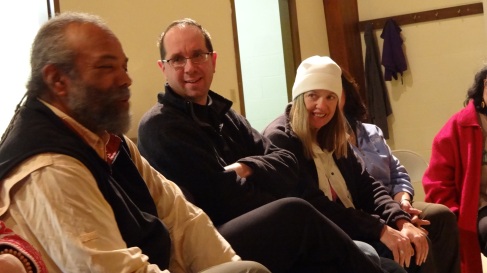 Sunday
A cold and windy morning when the walkers left Amherst, MA and drove to Seabrook New Hampshire, home of Seabrook Nuclear Reactor.

After leaving Seabrook the walk shuttled ahead to Amesbury MA where they walked a short distance from the center of town to the Amesbury Friends Meetinghouse.

On the road to the Meeting there was a small gallery that had up an exhibit commemorating the 50th year of JFK’s assassination during President’s Day.

Local artists welcomed the walk warmly and graciously before we departed for the Meetinghouse.

Stop by their gallery to check out the JFK exhibit!
The walk continued on to the Meeting. 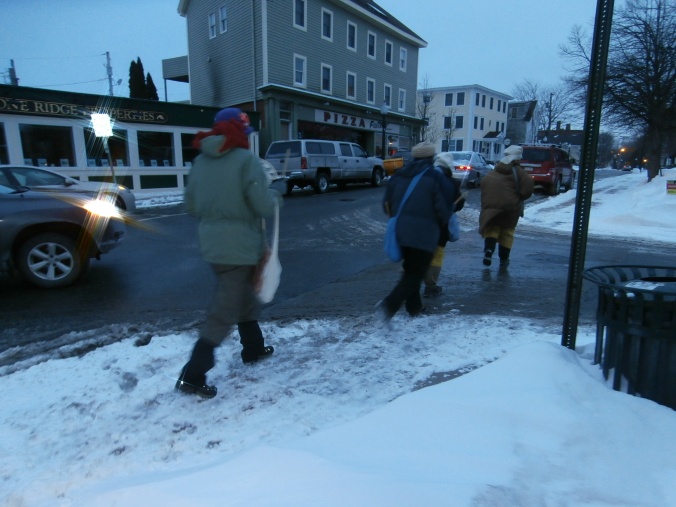 after a lovely potluck offered by members of the Meeting and community we heard “America’s Secret Chernobyl” presentation by Charmaine and stayed the evening at the Meeting.

The walk leaves Amesbury for Newburyport to walk into Ipswich.

A wonderful second day for the Walk For a New Spring Peace Walk with blue skies and sunshine for over 35 participants who gathered at Pulaski Park in Northampton, MA. After Sister Claire spoke with sincerity and wisdom about our focus for the walk, the walkers chanted and drummed down the well populated Main St of Northampton and the high visibility thoroughfare of Rt. 9 towards Hadley, garnering many smiles, honks, waves and folks flashing the peace sign.

The American Friends Service Committee with Jeff  Napolitano and Nuclear Free Future with Hattie Nestle hosted  us for a lovely lunch at the First Congregational Church in Hadley MA, where participants shared about upcoming  and important nuclear free activist events and joined in some connection and laughter amongst themselves.

The group continued walking after lunch through Hadley on Rt. 9  eventually arriving at the Jones Library in Amherst, MA for a Potluck …