Food for Thought in Building a Non-Violent World

7 Principals of Peace to be Practiced
From the Louis D. Brown Peace Institute, Dorchester MA, an organization for those who have lost loved ones to violence and all those who support the purpose.
Love – Unity – Faith – Hope – Courage -Justice -Forgiveness –

“… who is evil? Religion was handed down in the world for us so that evil can be converted to good rather than destroyed.”
-Most Venerable Nichidatsu Fujii 1953, Founder and Preceptor Nipponzan Myohoji

For more information regarding the this walk call 413-485-8469 or email us at walk4newspring@gmail.com

-See the earth as a great mother, who, along with the whole natural world gives life indiscriminately to us all.  Let us cultivate gratitude rather than brutal exploitation of the earth.

August 6,1945, close to 100,000 ordinary citizens died instantly from the deto- nation of a nuclear bomb in Hiroshima. Tens of thou- sands died agonizing deaths in the days, weeks and months to follow. Survivors still suffer, physically and psychologically.. 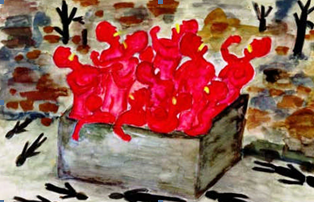 Drawn by a survivor from memory

The world has not heeded the call of the survivors. Nine countries have over 26,000 nuclear weapons with the USA and Russia having more than 95%. New more deadly weapons are still being de- signed and manufactured.

The survivors of Hiroshima and Nagasaki give message to the world

Clearly the mirror of Hiroshima and Nagasaki, with its inconceivable terror and grief, reveals the profound truth, that we must build a non-violent world.

As we reflect on the Boston marathon bombing and many other violent acts in the US and other countries, we see that the world has become more violent with less regard for the preciousness of human beings and more exploitation and de- struction towards our beautiful natural world.

We believe we are called- all together to work, walk, talk, listen to one another and find the will and determination to change the direction of our country, civilization.

We must devote ourselves to building a non-violent world.

“We must combine the fervor of the civil rights movement with the peace movement. We must demonstrate, teach and preach, until the very foundations of our nation are shaken. We must work unceasingly to lift this nation that we love to a higher destiny, to a new plateau of compassion, to a more noble expression of humaneness.” – Dr. Margin Luther King Jr. while marching against the War in Viet Nam Chicago, March 1967

“Instead of hypothesizing potential enemies, let us hypothesize this world as a poten- tial heaven. Instead of suspecting others as murders, let us believe in the Buddha na- ture of others, that they are children of God. Instead of looking at others with con- tempt, let us hold mutual respect and venerate one another.”
Most Venerable. Nichidatsu Fujii

One thought on “Remember Hiroshima and Nagasaki”